It's Time for a Party

I've been away for such a long time! Almost 4 months! So much has happened in that time and it was impossible to maintain any thought pattern long enough to think about a blog post. But what has brought me out of hiding is Michele from  Quilts From My Crayon Box and the big reveal of her famous Modern Mystery Round Robin 2. This was one of those posts I have been looking forward to sharing with you for a very long time. So you can imagine my disappointment when I tell you that my photos that I have been so carefully collecting are gone, gone, gone.  The hard drive died, as well as my backup. I did not make a back up of my back up, and so, all I have to show you are a few stolen photos from some of the other links of my work.

I started out by sending out this center block of appliqued fish. 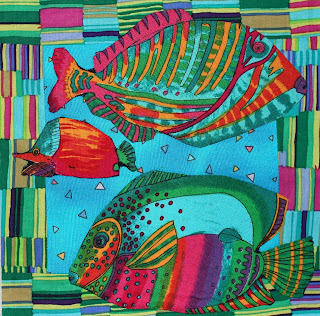 I asked my team to imagine what they would see on a snorkeling trip off the coral reefs.

The first one I received to work on was Kim's who made a paper pieced flower grouping.

I set it on the corner and added freestyle appliqued flowers to make it square again. 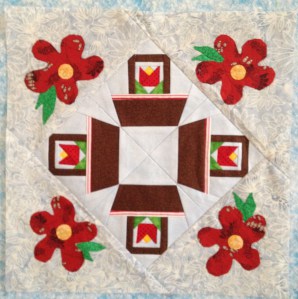 The second one I received was Diane's from England. On hers, I added green triangles set in purple triangles, framed by red triangles. 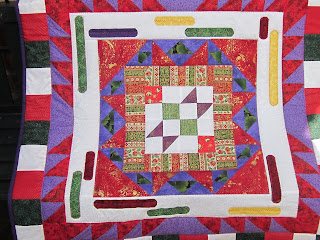 The third one I received was Laurel's.  I really enjoyed the jewel tones and found them inspiring.
I added Ohio star sections all the way around. 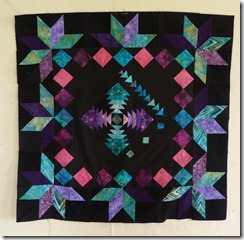 The fourth quilt I received was Megan's. Something about that a giraffe print in the center got me thinking about Africa. This quilt was beginning to tell a story and I wanted to add a chapter to it. So I appliqued some hard working ladies on the top tending their flock, and on the bottom, I added some what I hoped looked like a wavy Serengeti plains feel to the top. 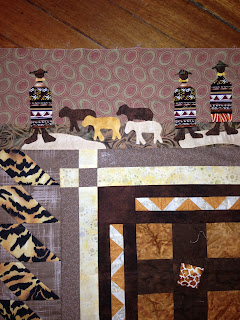 The last one was Bea's.  I liked one of the borders added near the middle, so I repeated that motif. 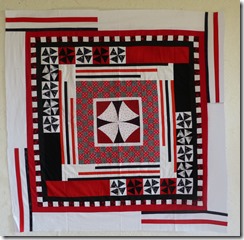 Then mine returned home. Now the picture I am showing you here isn't what I received. There was a thick solid blue border in the middle that stopped the flow. I removed it and replaced it with some re-purposed water color wonky log cabin blocks I had and made my block off centered. I really love the intricate work the ladies placed into my top.  It definitely looks like a beautiful, fluid watery adventure. I truly enjoy it!  I plan to enlarge it to a lap size quilt to use during the winter. 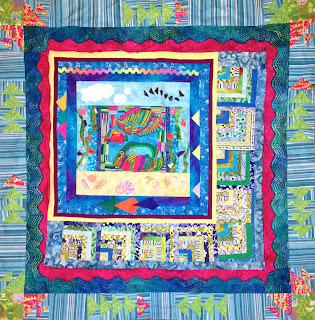 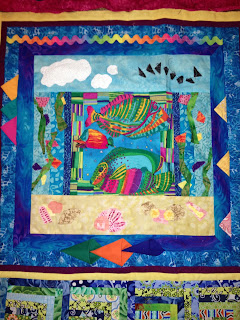 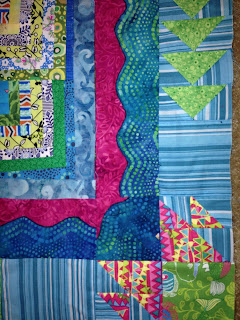 Once again, Michele, thank you for your hard work in keeping the swap running smoothly, and special thanks to this crew of quilters who really inspired me to try new colors and techniques.